Can you learn two languages at the same time? (The Answer May Surprise You…)

I have a confession to make… I’m obsessed with learning languages.

Currently, I speak five languages fluently and two at an intermediate level. I’m dying to add two more to my list because I just can’t get enough.

In my opinion, learning languages is as addictive as getting tattoos and piercings or indulging in a box of yummy speculoos (you know, those tasty biscuits we usually eat around Christmas time). It’s fun, exciting, and awards you with a kick-ass dopamine hit.

And usually, after some time has passed allowing for integration and recovery, you’re left wanting to repeat the adventure all over again.

If you’re reading this article, chances are we have a few things in common — you like learning languages (maybe you’re slightly crazy about it like me) and you’re thinking of learning two in tandem.

But can you learn two languages at the same time? Or, a better question is — should you?

I teach French as a second language and it’s both a passion and joy of mine. I love sharing my native language with my students. I also find it super fun to be able to switch from one language to another when I’m teaching and I can tell you that most of my students love juggling languages too. It’s fun, cool, and satisfying to be able to effortlessly make the switch.

My intermediate-level students often ask me if it’s possible to learn another language while still studying French.  In my personal (and professional) opinion, the answer is both yes and no.

NO, you CAN’T learn 2 languages at the same time.

If you’re an adult and an active professional like me, you probably don’t have much time for extracurriculars like language learning.

Language learning takes time, concentration, and good ol’ fashioned elbow grease. It’s not something you can half-ass or do passively (at least, not in an effective way).

As a busy adult learner, you may even be struggling to attend one language course regularly. Life and all the ‘fun’ adult responsibilities can get in the way of studying and monopolizes your downtime.

We only have 24 hours in a day after all.

Any precious space you have in your schedule to study your target language will be jeopardized if you decide to pick up another one. Because essentially, all the free time you have for learning that one language will be split into two — making your learning journey far less efficient.

The problem with splitting time between two languages is that you may inadvertently dedicate more time to the language you find more fun or easier (even if you try to be as unbiased as possible — we’re human and sometimes we can’t help but play favourites). That means the second language will be slightly neglected and progress way slower. You may wonder if it’s even worth it.

Another thing to consider is your goal for learning a language. Maybe you’re just doing it for pure fun, interest, or enjoyment. Or maybe you have a specific objective — like an upcoming job interview, an official exam like the DELF, or an exotic trip planned. If this is you, it’s best to focus on your one target language at least until your goal is met.

But here’s my general advice. If you’re keen to learn two languages at once, I recommend that you speak at least one other foreign language (and are a B2 level at the very, very minimum).

Well, once you have this higher level you’ll have trained your brain properly on how to learn a second language. Once you’ve mastered a foreign language, adding a third or a fourth will be way easier because your brain is already familiar with the process of language learning — including how to break it down and how to study.

So once you have two languages confidently under your belt, learning another one will feel more satisfying, purposeful, and useful.

Yes, you CAN learn 2 languages at the same time.

The first step is assessing your time. If you consider that your time for studying will be halved, and you still have enough time on your hands — you’re off to a good start.

The next thing you want to consider is your motivation and your schedule, or more precisely, your regularity in studying. For example, if you can find a routine for the two languages for at least 6 months for up to two years, why not give it a try?

If your target languages are within the same family (like another Romance language such as Spanish, Portuguese, Italian, or Romanian) — you may find the journey a lot easier. The reason for this is that they follow a similar structure and logic, with many overlapping words. 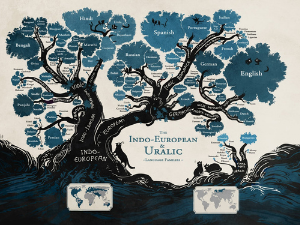 Taken from The Guardian

One thing to note, however, is that some people are perfectly content with obtaining a base level (around A2) where they can talk to the cashier at a grocery store, navigate the metro, or ask for directions when travelling.

People like this may dabble in multiple languages without going too in-in depth — because, for them, it’s more important to speak many languages at a low-level than it is to master just one or two. If you go down this route, you’ll find the pros of this are that you will have contact with many different languages in (potentially) many different language families. It will open your eyes to cultural elements and insights you may not have recognised or noticed before.

The cons are that in a real-life situation you may still struggle to use what you know because your ear is not sufficiently trained to understand native speakers, natural cadence, or slang. Another downside is that you are more likely to forget what you’ve learned, because as they say — if you don’t use it, you lose it. This is not to discourage language-learners who dabble. I myself do this because I’m a self-confessed language addict.

But be wary that it may not be the most efficient method if you want to grasp a very good understanding of a foreign language.

While being able to effectively learn two languages at the same time depends on your goals, lifestyle, and previous experience — you need to keep one thing in mind at all times.

Remember that language learning is not a race — it’s a marathon!

For long-lasting results and significant improvements, the best method is to take your time, be consistent in your studies, and enjoy the process.

What languages are you learning other than French? Join my weekly newsletter below and let me know!