One major mark of success and exciting achievement while studying French (or any foreign language for that matter) is to watch a French movie without subtitles and without suffering.

If you’re a big fan of films and you want to combine your passion for movies with improving your French skills — this article is for you. You’ll learn what the best options for practicing your auditory comprehension of French are while simultaneously engaging in your favorite hobby. It’s a win win.

The journey to this rewarding goal may take some time but I assure you that as long as you work and study on a regular basis, this victory will be celebrated sooner than you think.

I was so impressed by the speed people spoke — the cadence and the effortless flow.  But I couldn’t identify a single word when they were talking around me.

After two months of intensive courses, I finally started to understand a few things. By “understand” I mean I could comprehend a few words without panicking and I could read at least a part of the ads I saw on the street.

I decided I wanted to challenge myself and watch a movie in Spanish.

My level was obviously not good enough to understand everything or to catch the nuance and fineness of the language. But it wasn’t my objective anyway. I just wanted to see if I could follow the general idea of a movie without being fluent or at an advanced level.

At that time, the movie “los dos lados de la cama” was à l’affiche in 2005. The very first movie in Spanish I saw became, of course, my favorite one. And I did catch the general idea of the movie. I couldn’t understand every single word or expression but I understood what was going on.

And that was pretty damn cool.

Your first movie in French: the issues

Many of my students try to watch Amélie Poulain as their first French movie. Huge mistake! They speak so fast in the film, it’s sometimes difficult to follow even for native speakers. As a consequence, unless you have a B2-C1 level, the only result you’ll probably get from the film is frustration or sadness — or both. 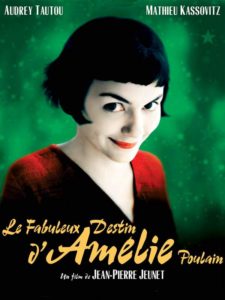 So without further ado, let’s first identify your level in French. How do you feel about your French right now? Where are you with your French studies? Do you feel comfortable enough to watch a movie? Good for you!

Generally, when watching a movie in French for the purpose of studying it’s advised that you understand at least the present and past tenses. If you haven’t mastered these yet, it’ll probably be too challenging and discouraging (and we don’t want that!)

Whether you are based in Paris, Brussels, London or anywhere else in the world — there are a lot of watchable resources available online (and even offline). And some of them are totally free.

I’m often asked about the classic dilemma — what’s the best strategy for movie watching? With or without subtitles? Subtitles in French or your native language?

In order to reach the beautiful and super satisfying accomplishment of watching movies in French (and actually enjoying them), let’s have a look at the different options available to you…

The solutions I found and why they work

In my opinion, there are several steps to follow before watching a movie in French. First of all, please, please, please, don’t think that the first time is going to be an easy cake walk.

You’re going to have to accept the frustration of not being able to understand absolutely everything. Watching a movie in a foreign language for the first time is like attending a networking event or a dancing class as a complete newbie: it’s going to be a bit uncomfortable and awkward.

In this ultimate guide, I compare 4 different options for watching movies:

Watching French movies with English (or your native language) subtitles

This is definitely a good exercise to help your ears become familiar with French sounds. If you’re feeling uncomfortable with the French language right now, I highly recommend you start with this way of watching movies. It’s an excellent starting point, especially if you are not surrounded by the language at all. You can certainly start this practice with an upper beginner level (A2). Don’t hesitate to watch a movie you already know and would like to start.

Note: Be aware that your language improvement won’t be spectacular from this exercise alone, and you may be distracted by subtitles —  but it’s a good start to get used to the language.

This exercise might be considered by movie purists to be one of the weirdest exercises ever. And understandably so. The movement of the actor’s lips don’t really match the sound of their voice, nor does the tone of voice seem natural either. Also, in order to sync the sound with the visuals, parts of the original text might be changed. Some people get very annoyed when the mouths of the actors aren’t properly synced — but for me personally, I find it pretty funny. If you’re a movie purist who’d be peeved by it, I don’t recommend you to try this strategy.

If you’re up for appreciating some creative differences and quirks, then you’ll probably enjoy this exercise.

Hint: A good practice most polyglots do when encountering a new word, is pausing the movie to search for its meaning. Make an effort to do this to increase your retention!

You can definitely start this exercise once you reach the A2-B1 level. At first, you’ll likely be reading every single word on screen, focusing on your reading comprehension instead of listening comprehension. Once your brain starts to get used to French tones and voices, you’ll slowly stop reading and begin to enjoy the movie in its entirety. Sure, you’ll read from time to time when you don’t understand what they say — but you’ll notice the subtitles becoming more of an aid than a necessity.

If you have an intermediate level, after a few minutes, you won’t even realise that you are watching a movie in French. Your brain will do all the work for you.

Hint: There’s one important aspect and caveat to this method. Subtitles are often shortened, so the text and content don’t always 100% match the spoken words.

With this method, the best strategy is to choose a movie you already know. Your brain and memory will help fill in the gaps, and because you already know the story line — it’ll alleviate any pressure or stress you have about ‘failing’.Your brain will need a few moments to process and understand that the movie isn’t in your native language.

Hint: Keep in mind that for your brain, learning a foreign language is like getting used to a new roommate. Depending on the degree of tolerance, it can take some time. Be patient and enjoy the process!

This strategy is well-suited to those who don’t want to put in too much effort. You can watch your show as usual, with French subtitles to accompany them.

One of the cons of this strategy is that you might not focus on the subtitles, therefore defeating the whole purpose of having them… So if you pick this strategy, make sure you make a conscious effort to read the subtitles. Pause where necessary to look up words or expressions.

Hint: As a French teacher who has had more than 10 years of experience, I recommend that you try watching a movie with French subtitles and avoid the interference of your native language (or English). Yes, it will be challenging at the beginning. But the results you get will be significantly stronger and way more impressive.

Keep in mind that watching a movie in another language is a way of studying. It takes effort, but it’s hella rewarding.

Have you already watched a movie in French? What was your first French movie? How did it go? Which strategy do you recommend?