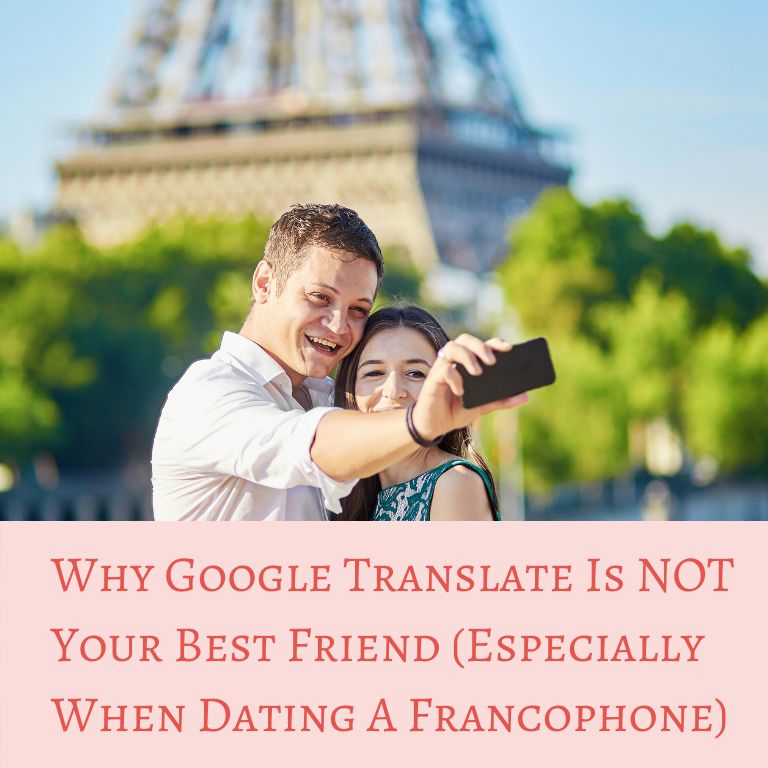 Dating a French person sounds very romantic, doesn’t it? French is often thought of as the most romantic language in the world. And it’s not hard to see why.

In between the French clichés and reputation for passion —  the French language and everything associated with it undeniably sparks an image of l’amour.

So if you’re currently dating a French girl or guy, or dreaming about dating one in the future — listen up. This article is for you.

Maybe you want to impress your love (or future love) with some endearing expressions or phrases in their language. You might be under the impression that learning French is a waste of time because you can easily Google Translate stuff to say some cute phrases or lightly engage in social situations…

Because even though Google Translate is revolutionary —  it won’t have your back while dating a French person, trust me.

In this article, I will give you concrete examples and situations where you can easily embarrass yourself and ruin the whole romantic vibe in an instant. And what’s even worse, is that these scenarios can easily and accidentally be replicated in situations with your in-laws (horrifying, I know).

So why isn’t Google Translate your ally when dating a francophone?

Well for one, French is a Latin language. As a consequence people AND things have a gender. The neutral gender doesn’t exist. This means that adjectives change depending on the gender of the word they are referencing.

If you’re translating from a Latin language (like from Spanish or Italian), Google Translate will get the gender from your original text. But if you’re translating from a language without gender (such as English or Dutch) Google doesn’t know if you are saying “you are beautiful” to a girl or a guy. Besides, some words and adjectives are totally irregular and the male or female form completely differs from one gender to another.

Now, I’ll share with you a true story. This happened to me many years ago when I was dating an American guy. He was very sweet and keen to learn French. On the fourth date or so, he took out his phone and translated “you are beautiful” (super cute, I know). Not knowing my gender as a female, Google translated it as “tu es beau”, the male form of the adjective. Coupled with the completely horrific pronunciation of beau, I confess that I couldn’t hide my laughing tears.

The correct translation should have been “tu es belle”.

Now, this was before Google Translate got its pronunciation feature. The tool has since evolved to include a pretty bang-on accurate pronunciation of French words. I highly recommend you use it to practise your listening sans modération.

My anecdotal story aside, I’m going to give you more concrete examples of why Google translate isn’t your win-man/woman.

This simple phrase “you are welcome” is another expression that Google Translate just doesn’t get. The literal translation shown above is, “Vous êtes les bienvenus” and is only used when someone arrives at your place, office, or restaurant. Use this phrase to welcome someone upon arrival — not after doing them a favour. Gender is also very important here. If you are welcoming a man you say “vous êtes le bienvenu”, for a woman “vous êtes la bienvenue” and for a group you say “vous êtes les bienvenus”.

When you want to say “you’re welcome” in the sense of “please it was nothing”, we say “de rien” (literally “it is nothing”).

When your date asks you if you want more wine or dessert, in English you will probably say something like “I’m fine thank you”  to politely mean, “no, thanks”. In French, if you use Google translate, it will give you the literal translation of “Je vais bien merci” which means “I am doing well”.

In this context, the phrase is not appropriate. It should only really be used at the beginning of a conversation when you meet someone and want to know how he/she is doing lately.

Now, if you are the one offered another drink or a dessert and you are full, you can’t ask Google Translate. It will give you “je suis plein.e”. Plein means full. In French, you can’t use the expression “I am full” to reference the food. You’d use the expression “j’ai bien mangé” ou “j’ai trop mangé” instead.

“Je suis plein.e” can be interpreted as “I’m pregnant” in the sense that I’m full of something inside my body or I’ve been stuffed by something…. Yeah…. I know… not very elegant, hey?

But watch out because “Je suis plein.e” in Belgium or Quebec means “I’m drunk”. So unless you’re using it in this context in these francophone places, I highly recommend you forget this phrase.

“At the end of the day” in French means literally, when the day is almost over. While in English it means something else — as more of an expression to denote “when everything is taken into consideration”. If you want to convey the proper English meaning, use the correct French translation “en fin de compte” or “au final”.

Many of my anglophone friends and students love to say that they are very excited about something, like an event they can’t wait to attend.

You may have noticed that francophones (especially the French), don’t tend to show their excitement. As a consequence, expressions to show excitement and enthusiasm are lacking in the French language. “I can’t wait” is said “J’ai hâte” and it’s not used as often as it might be in English.

Here again, as showcased in the above image, Google Translate can’t recognise the shades of either language — giving a literal translation of “I can’t wait”.

If you don’t want to sound sexual in French, you can use the “surexcité” which is okay-ish. I personally just say “Je suis trop contente”. And yes, I know — I’m a bit boring. But that’s just how it is.

So after reading all these translation mishaps, what do you think? Are you still convinced you can get around and date a francophone while only using Google Translate?

Let’s continue with some more examples, but translating the other way around…

When you try to translate the sentence “I talked to her/him” in French, the translation will be “je lui ai parlé”. “Lui” means “him” or “her”. But even French natives won’t know who you are talking about without context, and Google Translate doesn’t either.

“Foutre” is a magical verb used in very familiar environment only and it can mean many things:

Tu te fous de moi? — are you kidding me?

Il se fout de ma gueule! — He is making fun of me

Mais qu’est-ce que tu as foutu? — What the fuck have you done?

Here is what Google says about foutre. The information is pretty incomplete, as you can see…

This one is without a doubt my favorite. If, after this example, you still don’t believe me about Google Translate not being enough for your French-speaking journey then I give up.

“Putain” means “whore”. Google is not lying here but…. “Putain” isn’t ONLY used to mean “whore”. “Putain” is used and said by every francophone in a familiar and friendly environment. Granted, some people use it more often than others. I personally use it at least 60000 times a day. And I use it for all sorts of situations.

I spilled coffee on my white shirt — Putain!

I’m in front of the metro turnstile and can’t find my Navigo pass — Putain!

The post said the delivery man came and I wasn’t there, but it’s not true because I stayed home to wait for him the whole day — Putain!

Pretty universal, right? Google Translate doesn’t even show you a little bit of how “putain” is really used.

Besides, if you want to talk about a prostitute as a profession, it’s more correct to say “prostitué” than “putain”.

Okay, a last one for the road and this time in Spanish.

Now, my intention with this article isn’t to knock Google Translate. It’s an incredible piece of A.I. that can help you immensely in your French studies. But it’s a supplementary tool, not your comprehensive answer to speaking and navigating a francophone environment.

As you’ve seen, Google Translate won’t always properly translate what you want to say. And that’s okay. Learning any language means you’ll inevitably face at least some awkward and embarrassing situations. It’s all part of the language learning process. Take it as a self-development exercise and learning opportunity. Then laugh about it and move on.

Have you had a funny mishap using Google Translate? Or do you avoid it altogether? Let me know in the comments below!